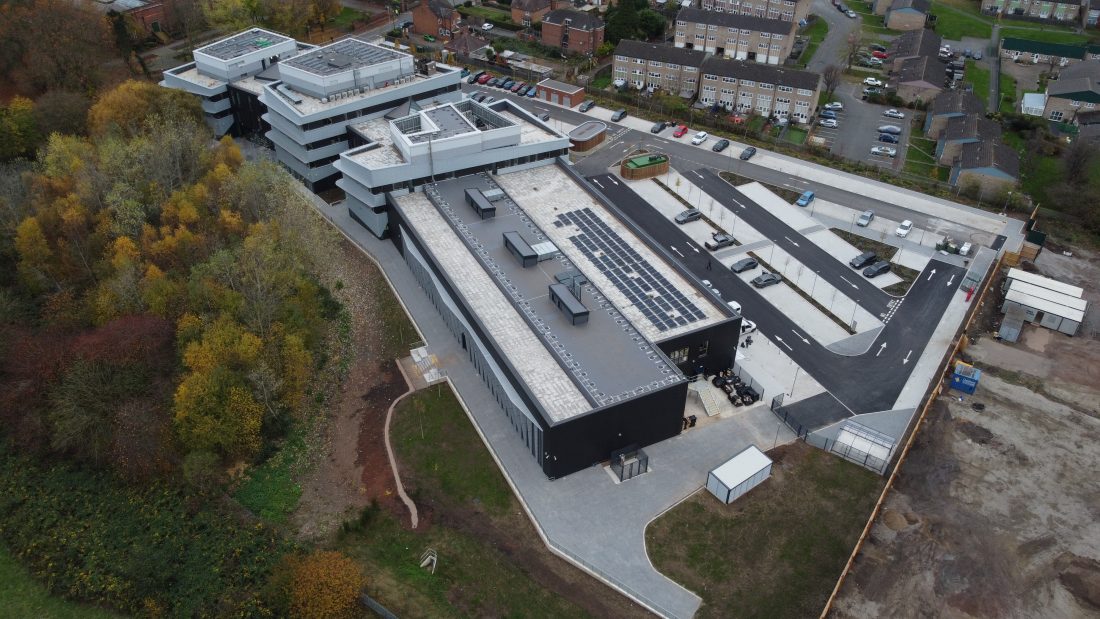 The keys to the second phase of a ground-breaking £100 million research, innovation and teaching hub for space-related high-tech companies and researchers in Leicester have been handed over.

Space Park Leicester, established by the University of Leicester in partnership with local, national and international partners, consists of a pioneering research, innovation and teaching hub, which will incorporate academic research, industrial space, and Earth observation research and development (R&D).

Building on Leicester’s 61-year history of space research, this project comprising of a 9,700 m2 facility including shared laboratories and teaching facilities, will put Leicester at the forefront of space technology in the UK.

Following completion of the building, the keys for the second phase were handed over last week to Professor Richard Ambrosi, by representatives from construction company Bowmer + Kirkland.

Housing  laboratories, workshops and calibration facilities along with high technology projects such as the double-walled insulator for the Mars Sample Return 2026 NASA ESA Mission as well as one of the UK’s largest academic clean rooms for the assembling and testing of space equipment, the second phase is intended to be in operation and accommodating most of its occupants by Christmas.

Professor Richard Ambrosi, Professor of Space Instrumentation & Space Nuclear Power Systems at the University of Leicester, said: “We are extremely proud of completing phase two of this project. This is another major step in consistently expanding our understanding and knowledge surrounding space and space-enabled sectors.

“With the opening of Space Park Leicester and other recent nearby developments, Leicester is well and truly on the map as a key place to be for forward-thinking, high-end technology and space science businesses.”

Professor Mark Sims, Professor in Astrobiology and Space Instrumentation at the University of Leicester said: “This phase will transform the way that space technology and satellites are conceived, designed, operated and produced. Building on Leicester’s long-standing heritage of space instrumentation and manufacturing including recent projects, such as the Mercury Imaging X-ray Spectrometer for ESA’s BepiColombo, structural and thermal lead for ESA’s UK-led Mid-Infrared Instrument for the James Webb space telescope, and the Raman Spectrometer for the ESA Franklin Mars Rover, Space Park Leicester is at the forefront of UK space expertise.

“I would like to thank everyone involved in the project for their assistance so far in reaching this monumental milestone which sees us bringing more research engineers, scientists, students, and industry partners into Space Park Leicester.”

Phase two of the development will embrace combined work bringing together industry and academia including the new Space Research Centre. A total of 14 state-of-the-art workshops and laboratories will incorporate Artificial Intelligence (AI) digital and advanced manufacturing technologies, and with partners, robot-assisted satellite production alongside research into novel solutions for downstream space data challenges. The data obtained from the latter will be interpreted to help answer real world problems such as air pollution and mitigation of climate change.

The  clean room, which measures a staggering 300sq m with a height of 6m, is located in an area designated for industry, which allows for horizontal payload entry prior to being lifted vertically by an in-built overhead crane.

Providing an update on The Manufacturing, Engineering, Technology and Earth Observation Research Centre (METEOR), which is an important part of Space Park Leicester, Professor Richard Ambrosi said: “The METEOR research project located its centre of operations at Space Park Leicester earlier this year and brings together industry and academics to provide the space sector with innovation.

“Meetings and events following their move into Space Park Leicester have enabled the resident and non-resident partners to meet regularly and continue their development of the community throughout 2021.”

Steve Chambers, Bowmer + Kirkland Regional Director, said: “We are proud to be involved in this project and to hand over stage two of this outstanding facility. I am proud of our team who have worked hard through a challenging period to enable the successful completion of phase two and we are all excited to see what the future holds for Space Park Leicester.”

Kevin Harris, Chair of the LLEP Board of Directors, said: “Thanks to our initial £8.175m Local Growth Fund investment towards the first phase of Space Park, Leicester and Leicestershire has become and will continue to be an international hub of space technology and innovation, providing jobs and success for the area.

“I’m delighted that phase two is now complete and seeing all of the pioneering businesses making the Space Park their home makes me extremely proud that the LLEP made such a major contribution to its creation and growth.”

Future plans include further development on the Leicester site, with a commercial Low Cost Access to Space (LoCAS) payload and satellite manufacturing facility for the manufacture of small to mid-range satellites. LoCAS will address the UK’s need for capacity to scale manufacturing of payloads and satellite constellations and will provide a pipeline for burgeoning UK launch services, lower the barriers to new entrants in the market and support the development of new business models for downstream services.